Amanda is a mature student at Edinburgh College and has also taken on the role of Health Executive Officer. For Student Mental Health Day, Amanda is sharing her experience of accessing support while studying.

“You will get better”.

If I had a penny for every time someone told me that, I’d be a millionaire!

That suggestion become a reality after I started college.

My journey began the day I received my acceptance letter. Prior to that I could barely get out of bed each day, and had zero self-belief or motivation. Having depression limited my chances of living my life, or so I thought. Days thinking, I wasn’t worth it or not good enough seemed to drag on and on. Is this my life now? Will I ever get better? My mood would change with the weather; every day was a constant battle with myself.

Deciding to go back to college full-time after almost 10 years was a very daunting task. It was something I didn’t even think I’d get accepted into but just applied because I was unemployed and terrified of being stuck in that situation forever. Even after I got told I was on the course, I wasn’t sure this was what I wanted to do. Early mornings, getting on a bus full of people, classmates you’ve never met before, eating alone in the canteen, assessments, the list of things I was scared about could go on. I remember being told on our first day that we were going to be doing some ice-breakers…could this day get any worse I thought to myself?

Weeks went on and I started to relax a little in class. My classmates were all so nice and we really started to bond together. One day our tutor gave us a task on assessing ourselves – what we wanted to achieve, what we were proud of, and what we done well. I had never thought about these types of things before! Very anxious I asked to speak to my tutor in private at the end of the class, I opened up to her about my depression and anxiety and how I wasn’t used to doing this. She was so supportive. I got given information on support here at college and she sent an email out to all my other tutors to let them know of my situation and how to take it easy on me. I remember feeling a slight weight being lifted and a warm fuzzy feeling inside which I hadn’t felt since before I fell ill. 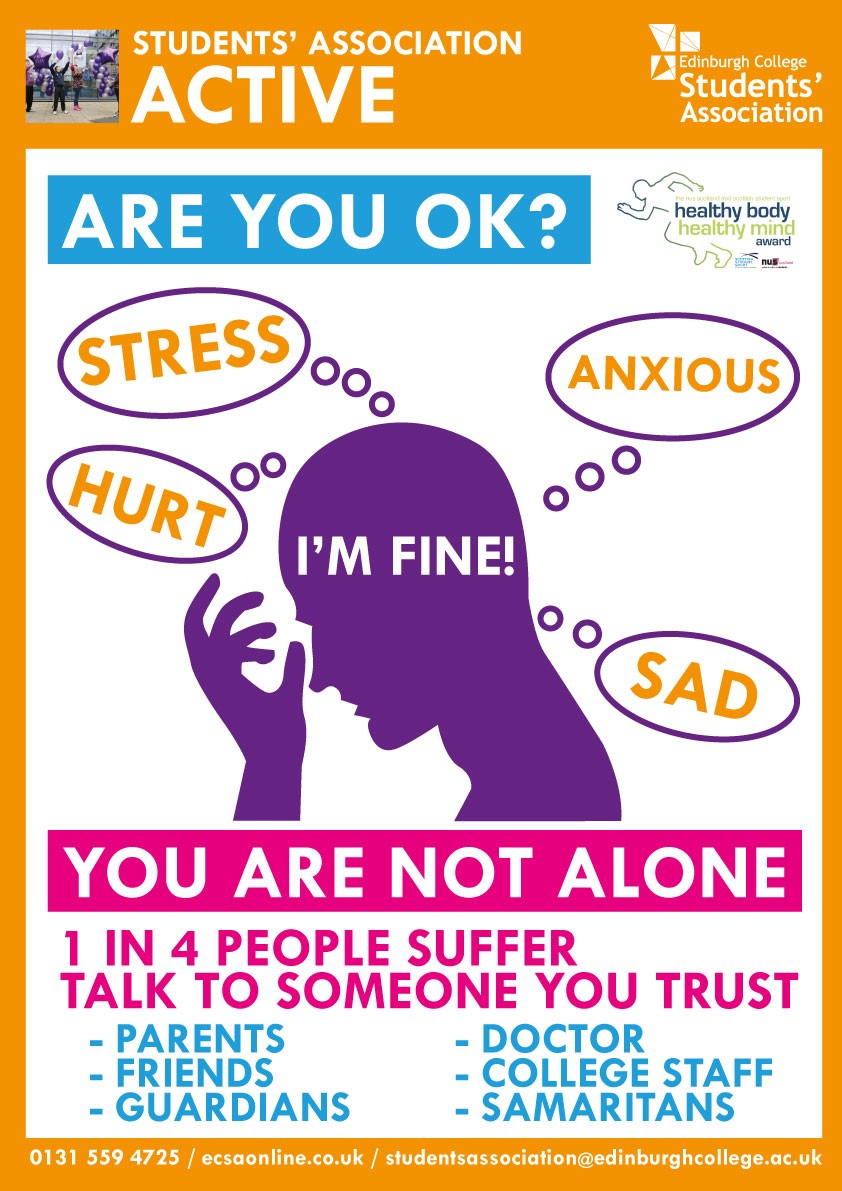 Amanda has been really involved in fighting stigma at her college-including making this poster to help raise awareness.

Being elected Class rep was great, I felt uplifting that my classmates had picked me, out of everyone in the class. At first I didn’t take to role to seriously, not knowing what was asked of me I started missing class rep meetings. It was getting closer and closer to the Christmas holidays and I’d fallen behind on class work. Being off for a few days turned into being off for two weeks. The longer I was off the harder it felt to go back. I did although get the chance to catch up on work whilst being off and my tutors were really good at keeping me up-to-date with assignments. It really felt like I had taken two steps forward and three steps back! I was so disappointed in myself!

The opportunity came up to be a Health Executive Officer at my campus, my learning development tutor had told me about it and suggested I went for it. Still feeling very low and struggling with the stress of exams coming up, I decided to give it a go and thought it might give me the motivation to stay on at college. Knowing this role involved people relaying on me for advice, I had to step my game up a bit. After the Christmas holidays the new semester was less stressful and I was able to focus on coming up with ideas on how to improve mental awareness around college along with other issues regarding student’s health. I met other Exec’s within college and we came up with a few ideas and found out that I wasn’t alone, and there were others feeling and thinking the same as me. Talking about my mental health issues really helped, I honestly thought I was only one at college who suffered from anxiety and depression.

Working together with the college to fight the stigma around mental health and bringing awareness to students is amazing. I’ve never felt so relived to be helping others the same as me. Letting students know they are not alone is the best thing I could ever think of doing. College really did give me a second chance at life and I feel grateful to be able to share my experiences. I’m far from being back to my old self but I am a millions miles forward than I ever thought imaginable. Keep faith and believe you can do anything you set your mind too.